The Faroese Government is introducing new whaling regulations in May intended to improve killing methods in the pilot whale hunt. Faroese animal welfare legislation, which also applies to whaling, stipulates that animals are killed as quickly and with as little suffering as possible. However, pilot whaling has long attracted international condemnation for the extreme cruelty inflicted upon these sentient, highly social animals during the drive and killing process.

Entire family groups of pilot whales, often numbering many dozens of animals, are driven ashore and slaughtered in shallow bays especially authorised for this purpose. The sharp hook often driven many times into a whale to drag it ashore, has been replaced by a round-headed implement that is inserted into the blowhole to secure the whales for slaughter. From 1st May 2015, the recently developed ‘spinal lance’ will replace the traditional whaling knife, and be used to sever the spinal cord and major blood supply to the brain, intended to inflict rapid loss of consciousness and death. From May 1st only people that have attended a special course on the new regulations and killing methods will be licenced to kill whales. 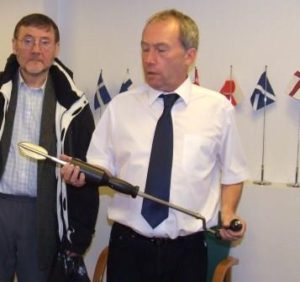 Every year, an average of 800 pilot whales are driven ashore and slaughtered for their meat and blubber in the Faroe Islands which are situated roughly midway between Scotland and Iceland. The hunt has taken place for centuries and is deeply ingrained in the Faroese culture. However, while once a valuable source of food for these remote islands, today there is no longer any vital nutritional need to hunt the whales. In fact, since 2008, Faroese Health leaders have warned that the whales’ meat and blubber is now so dangerously contaminated with mercury, PCB’s and other industrial poisons that it should not be eaten at all! There is already a high incidence of diseases amongst the Faroese population, including children, linked to ingestion of these toxic pollutants.

While the Faroese claim the whale hunt or ‘grind’ is sustainable, the growing impact of these pollutants on the whales is barely considered, even though they are already under increasing threat from climate change, commercial over-fishing of prey species, entanglement in fishing gears, ship strikes, increasing levels of harmful ocean noise, lethal military sonar and other disturbance. The combined impact of all these threats on the whales is simply unknown, but potentially catastrophic.

While appreciating the intent behind the new whaling regulations is to improve certain aspects of the killing process, Campaign Whale is concerned that Faroese whaling remains inherently cruel. We believe that the driving and then killing of entire family groups with young in front of one another must inflict the most unimaginable fear and distress on these highly intelligent, sentient and socially-bonded animals. Unfortunately, we cannot accept that the blow-hole hook is an adequately humane alternative to the sharp hook or that the spinal lance can be used in a consistently accurate and efficient manner to inflict rapid loss of consciousness and death in the often chaotic circumstances of a hunt.

For these reasons, Campaign Whale continues to oppose Faroese whaling as it remains inherently cruel, unnecessary and poses an unacceptable threat to the whales and the people that eat them. We we will continue to work from within and outside the Faroe Islands to end whaling as soon as possible.