“I was horrified to learn of the cruel slaughter of thousands of dolphins and porpoises in Japan every year. I totally support Campaign Whale’s vital work to give these wonderful animals the protection they deserve and so desperately need. Please support their campaign to save Japan’s dolphins and porpoises before it is too late!”

“Campaign Whale does a great job in helping to protect whales, dolphins, and porpoises worldwide. They should be supported and encouraged to keep up their fantastic work.”

Campaign Whale is grateful for their support.

You too can help us to protect whales by:

Yesterday, as Icelandic whalers headed to sea to begin this year’s hugely controversial whale hunt targeting 250 whales, Campaign Whale led a protest outside of the Icelandic Embassy in London demanding an end to the slaughter.

Campaign Whale was joined by representatives from other leading conservation and animal welfare organisations including the International Fund for Animal Welfare (IFAW), Whale and Dolphin Conservation Society (WDCS) and World Society for the Protection of Animals (WSPA).

The protestors unfurled a banner reading ‘Iceland be a nice land – stop killing whales!’ in front of the Embassy and displayed a life-sized replica of a harpooned minke whale, the first of which was killed today. The protest has made headline news in Iceland. 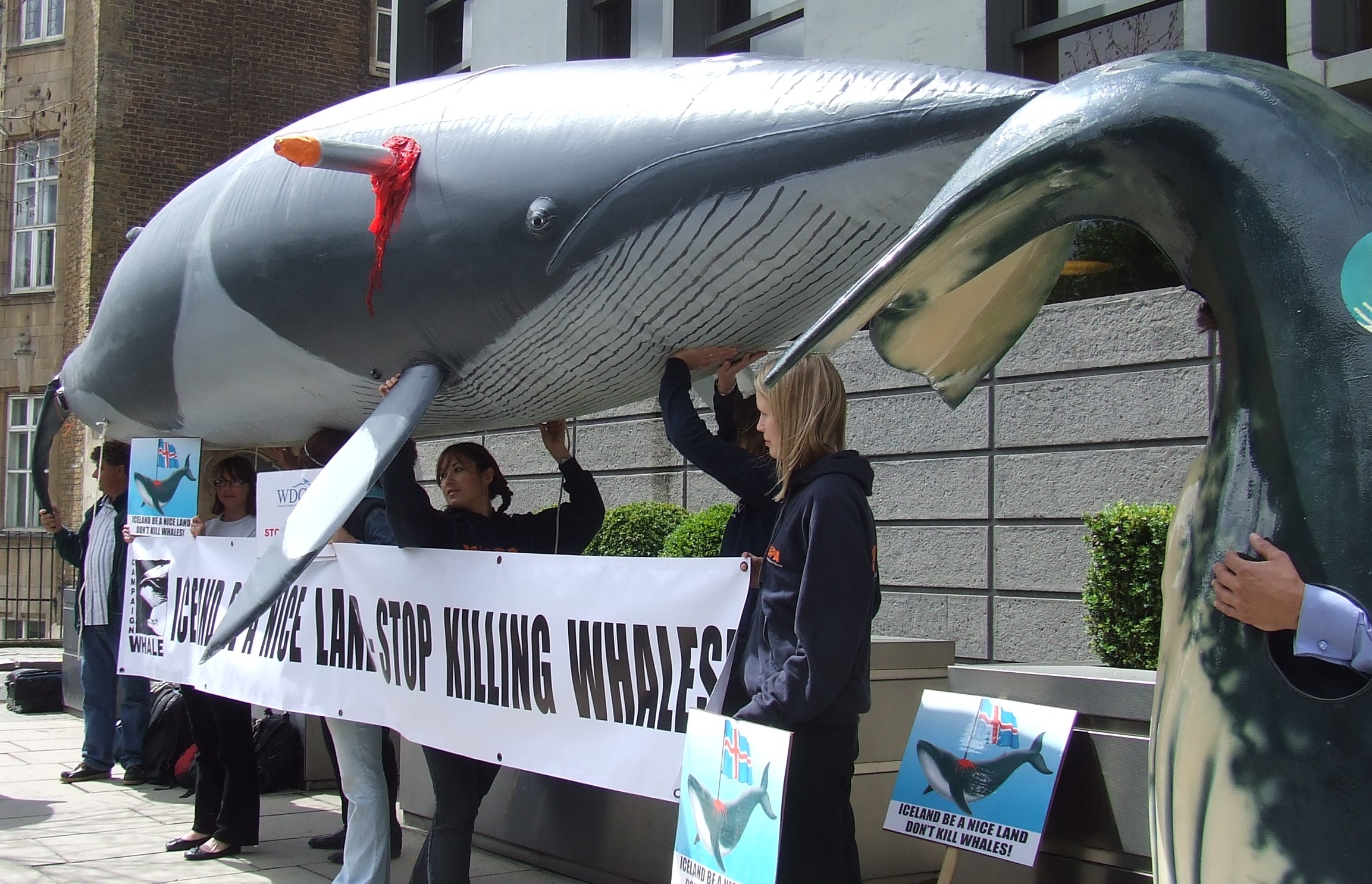 Director Andy Ottaway of Campaign Whale met with the Icelandic Ambassador Sverrir Haukur Gunnlaugsson and handed him a letter calling on the Icelandic Government to call off the whaling.

The Ambassador was also handed evidence of the British Public’s strong disapproval of Iceland’s resumption of whaling. An opinion poll, commissioned by Campaign Whale and conducted by YouGov, has revealed that 82% of the British public are strongly opposed to Iceland’s whaling, and two-thirds of those polled (64%) were prepared to avoid purchasing Icelandic products such as fish, prawns in protest at the country’s resumption of commercial whaling.

Iceland’s decision to resume whaling was taken by outgoing Minister Einar Gudfinnsson, who announced in January that 100 minke whales and 150 endangered fin whales could be hunted each year until 2013. However, since then a new government has been formed and with it a significant shift in the whaling policy.

The new government recently issued a statement saying that whaling, ‘will be totally reassessed with regard to sustainability and importance for national economy as a whole as well as Iceland’s international obligations and Iceland’s image’ but in the meantime a quota for this year remains in place.

Campaign Whale is calling on the Icelandic government to stop the killing of whales and to switch exclusively to whale-watching instead. In 2008, more than 100,000 tourists went whale-watching in Iceland, demonstrating that in Iceland whales are worth far more alive than dead.

To find out how you can help our campaign to protect whales, please click here to be re-directed to the campaign section on our website.

Please also help our campaign by:

In the past few years the International Whaling Commission (IWC) has been engaged in a process to try and determine the organisation’s future. The IWC, established over sixty years ago to regulate the whaling industry, is deadlocked in an increasingly acrimonious dispute over its future direction, with the pro-whaling nations: Japan, Norway and Iceland, demanding an end to the 23 year old moratorium (ban) on commercial whaling, while anti-whaling nations and animal welfare, environmental and conservation groups want a permanent end to all commercial whaling.

During the ban, around 25,000 whales have been slaughtered by the defiant whaling nations and this year Japan, Norway and Iceland will kill over 2,500 whales between them, exploiting loopholes in the IWC Convention that allow whaling ‘under objection’ to the whaling moratorium (Norway and Iceland), or for so-called ‘scientific research’ (Japan).

The compromise package favoured by the US will be discussed again at a special IWC intercessional meeting in Rome in early March before being presented to the IWC’s annual meeting in Madeira this June. It  proposes to allow Japan to resume coastal whaling operations in exchange for a reduction in the hundreds of whales the country slaughters every year for alleged ‘research’ in Antarctic and north-Pacific waters. Antarctic waters were designated a whale sanctuary by the IWC in 1994.

The compromise deal is a response to Japan’s serial threat to leave the IWC if the whaling ban is not lifted, and it appears it is Japan that the US is most keen to placate. However, there seems no way that a deal could be struck with Japan alone, and that would open the door to renewed or expanding commercial whaling in other countries, including Iceland and Norway.

Campaign Whale has been fighting compromise proposals that would legitimise a resumption of commercial whaling for some fifteen years.
The deal, shamefully supported by some well known ‘anti-whaling’ groups, have sort to justify compromise by arguing that whaling is ‘out of control’ and that such a deal ‘would reduce the numbers of whales killed’. Campaign Whale does not accept this argument. Any deal that legitimises commercial whaling would see the rebirth of an industry we have fought over thirty years to end, would mean countless thousands more whales killed and no hope of ever ending this cruel, outdated and unnecessary industry.

Please save the whales President Obama!

This is the most critical time for the whales since whaling was banned over twenty years ago. Please contact the US Embassy in your country, or President Obama directly, or preferably both, asking that the US reverses its current whaling policy and reaffirms its support for whale conservation by:

* Reaffirming the US’ opposition to commercial whaling
* Opposing any compromise packages, including creating any new category of whaling, that would lift or undermine the IWC’s whaling moratorium
* Using its considerable political and economic strength to take a lead in negotiating with the whaling nations to end commercial whaling
* To press for the reformation of the IWC, creating a modern conservation organisation dedicated to the global protection of whales.

Please do all you can, and invite friends, family and workmates to do the same. This really is the last stand for the whales! Please write, telephone, email or preferably all three!

To find the US Embassy in your country, please visit: http://www.embassyworld.com

This really is the last stand for the whales, please help them! Thank you. Medical experts in the Faroe Islands have said that pilot whales are now so contaminated with toxic pollutants that they should not be eaten at all.

The Faroe Islands, situated midway between Scotland and Iceland, is where whale hunts known as the ‘grind’ take place each year with entire pods of whales driven ashore and hacked to death in a bloody and cruel spectacle. The islanders kill hundreds of pilot whales each year, as well as dolphins and beaked whales.

Faroese medical officers have announced what anti-whaling campaigners have been saying for a long time – that pilot whale meat and blubber is so contaminated by mercury, PCBs and DDT pesticide pollutants that it is unsafe for human consumption.

“We have been arguing for many years that whale and dolphin meat is no longer safe for human consumption’ said Campaign Whale Director Andy Ottaway “In that time the Faroese alone have continued to slaughter whales in huge numbers in the most brutal and callous way imaginable. We hope this is the beginning of the end for this cruel hunt, but our pollution may yet drive these poor whales to extinction”.

Research on the impact of pollutants such as mercury on the Faroese themselves has revealed damage to foetal neural development, high blood pressure, and impaired immunity in children, as well as increased rates of Parkinson’s disease, circulatory problems and possibly infertility in adults.
“Around the world, particularly in Japan, hundreds of thousands of smaller whales, dolphins and porpoises are cruelly slaughtered for their meat. The tragic irony is that these animals are being slowly poisoned to death as are the people eating them,” said Andy Ottaway of Campaign Whale”, We have to stop killing these wonderful animals and stop polluting our planet. What this demonstrates is that what we do to our world and fellow creatures in it, so we ultimately are doing to ourselves.”

For further information about the Faroes whale hunts please click here to visit our campaigns section.

Reports from Tokyo suggest that Japan will allow the import of 65 tonnes of whale meat sent from Iceland last June. The meat, which was impounded by customers on arrival, consists of around 60 tonnes of fin whale meat from Iceland’s whaling company Hvalur hf, and about five tonnes of minke meat exported by the Norwegian company Myklebust Trading.

International trade in whale products was banned by the Convention on International Trade in Endangered Species (CITES)  to support the International Whaling Commission’s (IWC) ban on commercial whaling in 1986. However, Iceland, Norway and Japan have lodged formal reservations to the ban and so can trade whale products perfectly legally amongst themselves.

Japan, Iceland and Norway are currently killing over 2,000 whales each year between them in defiance of the whaling ban. However, up until now the whalers have been wary of reopening international trade for fear of serious repercussions from the international community, and the United States in particular.

Meanwhile, IWC members are currently engaged in ongoing negotiations to try and find a compromise way forward for the organisation before its next annual meeting in Portugal in June (2009).

“The timing of this decision, is clearly intended to send a defiant message to the IWC that its business as usual for whalers and they are not interested in compromise’ said Campaign Whale’s Andy Ottaway, ‘the sad fact is that world governments are not doing enough to stop just three countries from killing whales for profit. Only economic and political sanctions can save the whales now.”

For further information on Japan’s whaling and how you can help stop it, please click here to be re-directed to our ‘campaigns’ section on our website.

Thank you for your support!